As most of our audience knows, string transport is an integral part of Anatoli Unitsky's global program uSpace, which is a large-scale complex of developments in the field of transport, astroengineering technologies, residential infrastructure and agricultural biotechnologies.

The main task of this program is to transfer the industrial sector of human economic activity outside the planet simultaneously with the change in modern transport infrastructure, which, today, is the most aggressive factor that negatively affects the environmental situation. Here, string transport acts as the first stage, a kind of infrastructural and economic basis, the development of which will make it possible to implement the remaining parts of the program.

It is obvious that now this area of ​​scientific activity of engineer Unitsky’s may appear too complicated and too global for an uninitiated person. However, it may seem as such only at first glance. Just a little more than 60 years ago, flight beyond the Earth's atmosphere was considered something from the realm of fantasy, but today it has become a common phenomenon: spacecraft deliver people and cargo into orbit, astronaut watch on the ISS can last up to six months, and Mars colonization programs are seriously discussed in scientific environment.

Today uSpace is not just a theory, but a carefully worked out program, some areas of which can be easily implemented in practice. And most importantly, these areas have serious commercial potential.

We are launching a series of publications in which we will talk in more detail about the main aspects of the uSpace program, as well as consider the nearest prospects for their practical application.

In the first issue of our new rubric, we will talk about the main components of the program.

Structural elements of the astroengineering transport system by A. Unitsky

uSpace is a comprehensive program of non-rocket industrialization of space, and its main goal is to move environmentally harmful industry from the Earth to a near-Earth orbit for the sake of preserving and restoring the ecology of our planet.

ELС is an extensive network of residential and industrial clusters united by transport and energy communications necessary for the distribution of cargo delivered to orbit and back.

The city is located parallel to the GPV take-off and landing overpass, which should run in the equatorial plane over land and sea areas.

Transportation of passengers and delivery of goods within this network is provided using high-speed ground transport, and in the future – hyper speed transport, in which the rolling stock moves in a forvacuum tube that eliminates air resistance and reaches speeds of up to 1,250 km/h.

GPV is a self-supporting reusable aircraft plying the Earth-Orbit route. The structure encircles the Earth in the equatorial plane and takes off from the overpass, which also serves as a landing platform.

The system is driven by the centrifugal force resulting from the acceleration of the flywheels of the linear electric motor located in its core. Cargo and passengers are placed in special modules attached to the GPV body and distributed along its length using high-speed transport. 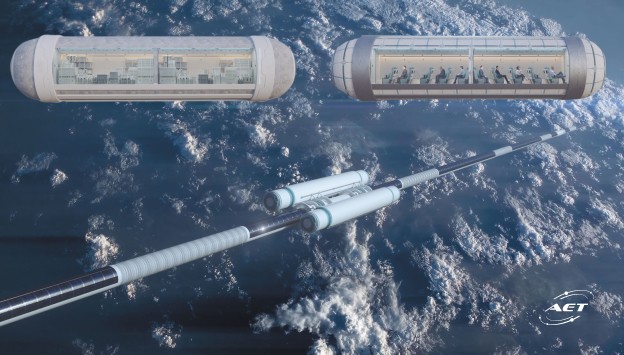 For each flight, the GPV can carry 10 million tons of cargo and 10 million passengers for the construction and maintenance of the space industry. Despite the impressive scale of the GPV construction, the price of a passenger ticket to the Earth orbit will be about 100 USD. At the same time, the level of comfort while travelling into space will be higher than when travelling on Earth. The low-price level is achieved not only due to the low operating costs of the GPV, but also due to the simultaneous transportation of a huge number of passengers and a large amount of cargo. 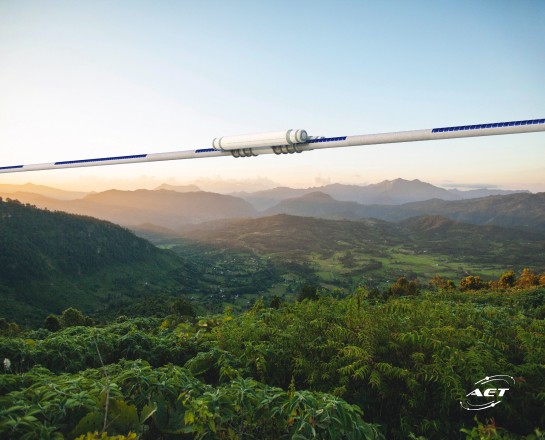 SpaceIndustry is a network of industrial and residential facilities located in the equatorial plane in low circular orbits. There are space plants, factories, power plants, as well as residential space settlements – EcoCosmoHouses (ECH), – in which the personnel serving the space industry will live and work. 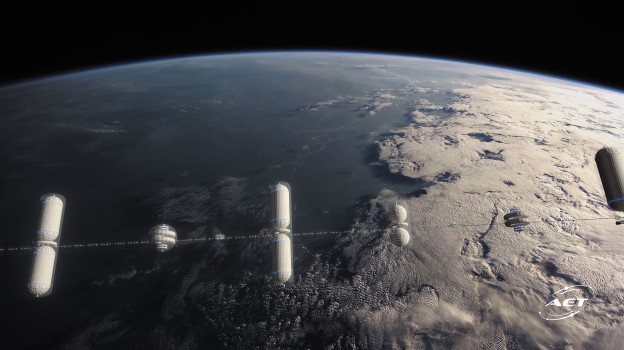 After the specified orbit is reached, the GPV will unload cargo and passengers along its entire length into the complex encircling the entire planet. The elements of the industrial space necklace are interconnected by transport, energy, and information communications, and with the planet Earth by means of the GPV geospace aircraft. A sphere, a cylinder or a torus can be a structural part of residential buildings as the most optimal options. 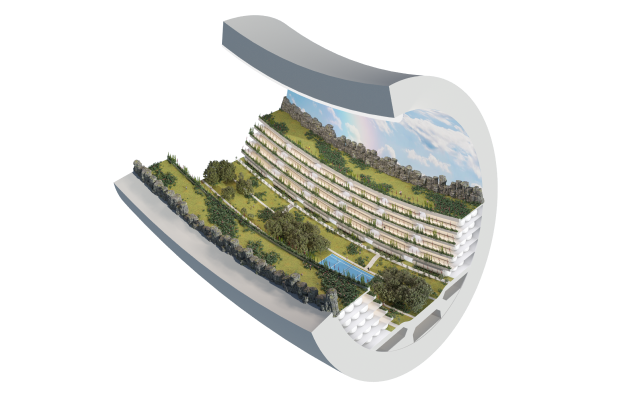 All of them rotate around their axis, creating artificial gravity. Inside the load-bearing shell of the residential cluster, made of high-strength materials, there is a layer of soil and living quarters are arranged, filled with full-fledged Earthly atmosphere. Outside and inside, the structure is equipped with anti-meteorite and anti-radiation protection.

ECH is a space structure with an autonomous biosphere. Each ECH has artificial gravity and adjustable parameters of the environment. 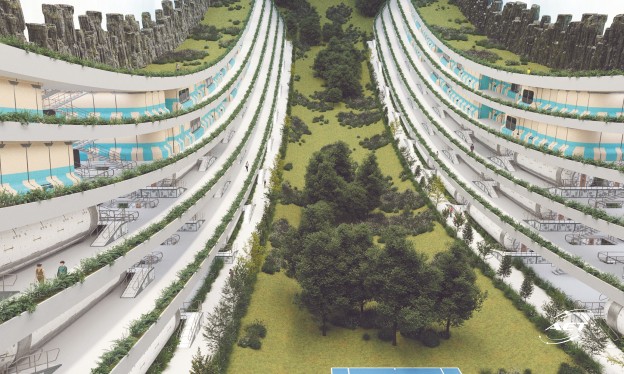 ECH’s biosphere can provide autonomous accommodation for up to 10,000 people. The passenger and cargo modules of the GPV can be used not only as means of transport, but also as a full-fledged dwelling. It is possible to arrange a separate zone of ECH from such residential modules. Together they will represent a kind of suburban low-rise neighbourhood, where each family has its own space.

The modern level of development of science and technology makes it possible to implement the uSpace program in the foreseeable future. Of course, the implementation will require significant effort on the part of technicians, researchers, and inventors. However, the resources expended will be recouped as the program gives humanity access to the limitless energy, space and raw material resources of cosmos. In addition, uSpace will gradually get rid of harmful industrial enterprises on the Earth, due to which the ecology of the planet will be restored and conditions for a comfortable and safe life of people in harmony with nature will be provided.