As shown by tests conducted at SkyWay EcoTechnoPark in 2017-2019, even a perfectly smooth backlash-free welded seam causes a light knocking of wheels on the rails caused by the local variation of steel hardness. This may be acceptable for urban transport running at speeds up to 150 km/h. The noise level and running smoothness of the vehicles demonstrated at EcoTechnoPark meet all the necessary requirements and are quite comfortable for passengers. EcoFest 2019 guests will be able to make sure of it. However, for high-speed transport, the existing rail configuration may not be sufficient. In this regard, in order to improve the high-speed track structure, it was decided to modernize the raceway.

The solutions worked outed by SkyWay design organization provided the opportunity to eliminate transverse welded seams almost along the entire length of the rolling surface at the test section of the high-speed complex. Absolutely unique technology should allow not only to confirm the expected features of running smoothness and noise level of high-speed SkyWay transport (up to 500 km/h), but also to make passengers’ feelings extremely comfortable when riding at such speeds.

In addition, this solution allows to achieve even more reliable operation of the anti-derailment system, and the experimental coating of the raceway is designed to make the track structure even more durable. Tests with the prototype of high-speed unibus on the updated track are planned to begin in the near future. Last week, the pod was delivered to SkyWay EcoTechnoPark, there are tests ahead, which, by the way, can also be witnessed by guests of EcoFest 2019 on August 17.

Let us recall that the urban/high-speed passenger transport system is the first object in SkyWay EcoTechnoPark on the date of construction start. As it was supposed, the route would be extended by 20 km across Belarusian woods and marshland. Such distance is needed for comfortable acceleration, demonstration of the claimed speed of 500 km/h and safe braking. However, the circumstances were such that granting of the originally promised strip of land to the developers of Yunitsky SkyWay transport was refused, which eventually led to the transfer of part of the work on the creation of high-speed SkyWay to the UAE, where the leaders of that State believed in the creators of the future transport, allocating several needed land plots for various types of innovative transport systems – both ready for implementation and promising ones. 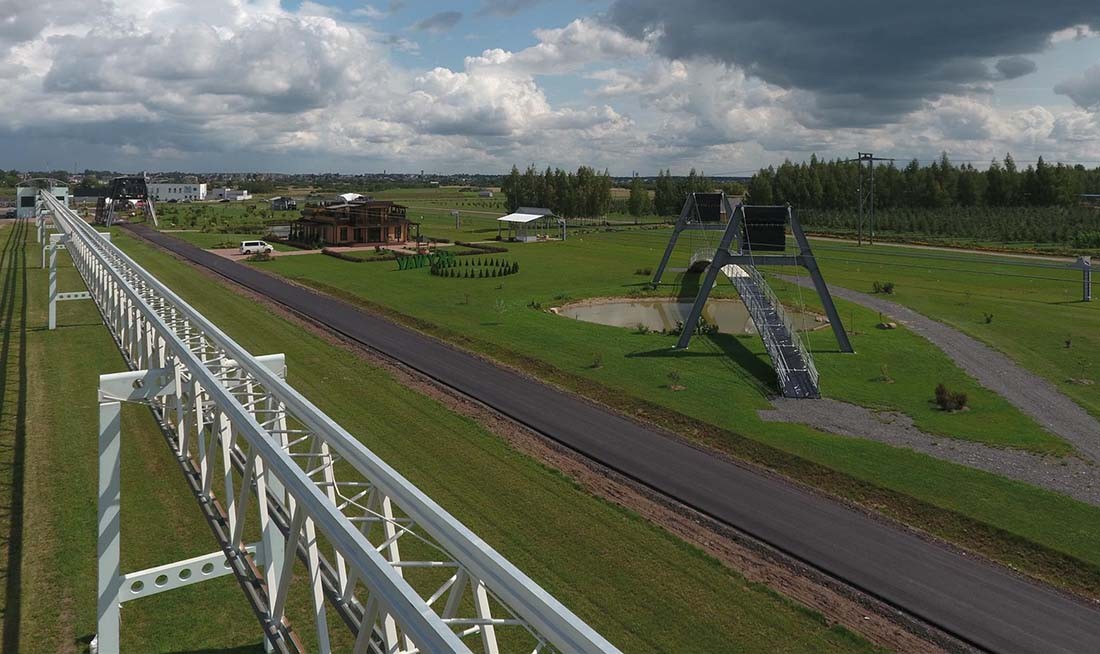 However, the 1st line in the Republic of Belarus, planned as a booster section for a high-speed vehicle, has found many other applications, demonstrating the versatility of the track structure and allowing to conduct various types of tests with most of the existing types of rolling stock. And, although the tests of the string rail have already shown that we are moving in the right direction, and the data collected during the trial operation of the 1st line has become a valuable contribution to the development of technology; it is time to move on, which necessitated the modernization of this truss track structure.

Wear-resistant and high-strength grades of steel are used for the construction of experimental tracks in SkyWay EcoTechnoPark, the string rail itself has a high strength, rigidity and evenness, it is technologically advanced in manufacturing and installation, has low material intensity and a wide range of operating temperatures: from +70 to -70°C. Therefore, even in this version SkyWay track structure does not have technological and expansion gaps along its entire length, but only welded ones (the railhead is welded into one length). In this regard, installation of an additional, hard-face steel head at the initial stage was impractical, since, in addition to the rise in the project cost at the time of funding shortage and the lack of confidence in the fundamental ability of string-rail transport to function among the public, it did not make sense. The main task was to demonstrate the working efficiency of such systems, where the pre-stressed elements are: overpass, rail, steel ropes inside and even its concrete filler, to some extent.

SkyWay string rail can be manufactured in different versions depending on the loads and operating conditions: both with a steel head and without it, and the latter does not have to look like a separate structural element, because primarily the railhead means a flat steel surface on which a wheel rests and rolls. The track structure of the 1st line was tested in the version when the function of the railhead was performed by the body itself, which showed the viability of such a technical solution from the viewpoint of comfort of movement both in terms of shaking and vibration, and noise load on passengers. We told about one component of this work in detail in the report on string rail tests in the laboratories of the Belarusian Research Institute of construction. As a reminder, it has successfully passed the test for noise then, i.e. it can be safely said that string rails produce much less noise than conventional railway ones, and the reduction of this indicator is achieved primarily through the use of special concrete to fill them. The noise level of the vehicle depends on several parameters, but in this news we speak about the noise of “wheel-rail” system caused by roughness elements on the working surfaces.

For example, in Japan, the problem of noise pollution along Shinkansen lines was partially solved by installing noise shields, removal of rolling surface irregularities using composite brake shoes, and subsequently by grinding the rails. Nevertheless, it is the noise from the wheel-rail pair that still dominates, and progress here has been less significant. It is very likely that this factor was the reason for the increased attention of specialists from Japan, who came to Minsk, “for inspiration”, according to their own words. The mistakes of Japanese pioneers are taken into account in our project, and the team of SkyWay Technologies Co. headed by General designer Anatoly Yunitsky continues to work on a record low level of noise emission in string-rail.

The tests of high-speed unibus that will begin soon on the updated track structure, are not intended to demonstrate the claimed speed of 500 km/h. This is not possible at such a short distance. However, the tests will allow to check a lot of units, structural elements and various functions that can be worked out on this very track structure. The module itself was ready almost a year ago and exhibited to the world community at the largest international forum InnoTrans 2018. And now its prototype (“mule”) will be released on the line – an accurate, outwardly almost indistinguishable copy, technically identical, however, devoid of very expensive finishing elements and other parts that do not need testing and do not affect the speed.