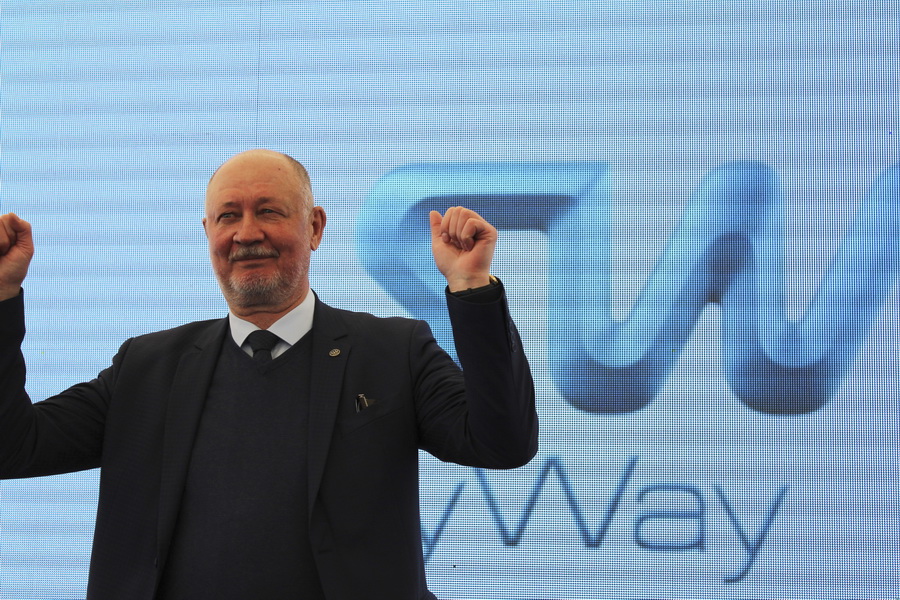 SkyWay in Mintrans of Russia: the next stage of expert examination has passed successfully

11 May 2016 23308
On March 25, 2016 there was held a meeting of the Working group on enhancing the innovativeness of public procurement in the transport complex of the Russian Federation with the participation of representatives from the SkyWay Group of Companies.

After the speech delivered by the General designer Anatoly Yunitskiy, who has presented the innovative string SkyWay transport system, the members of the Working group adopted the decision: "to mark out the prospects and to support the transport technology with the use of track infrastructure arranged on supports. To note the need for mandatory certification of composite technological elements of the track infrastructure, that are included in the specified transport technology. The Working group also decided to re-examine the technology after testing the prototype". This is evidenced by an excerpt from the minutes of the meeting of the Working group dated March 25, 2016, This means that after the testing and certification, the SkyWay technology will have all chances to be included in the List of innovative technologies recommended for public procurement. This decision can not be underestimated, as the government support may significantly facilitate the process of introducing the technology to the market, to allow, in the shortest time, to repay the expenditures for its development and construction of test sections, and, consequently, to profit from its sale. This minutes is in fact the evidence of Russia's readiness, with its serious need for the development and improvement of transport communication systems, to act as the SkyWay technology′s customer.

Let us remind that earlier we reported about the equally important first stage of expert examination in the Russian Ministry of transport, which resulted in the acknowledgement of the Skyway transportation technology as innovative, which automatically witnessed its engineering viability. The proof of this fact is the official response of the Ministry of transport and the minutes of the meeting posted on the official website of the Ministry. The result of the second stage was the confirmation of the state representatives′ interest in the practical application of the SkyWay technological product.

Thus, the only requirement left to carry out a large-scale introduction of the SkyWay transport systems to the market, remains the demonstration of a functioning sample and its certification, which is planned to perform in the near future, immediately after commissioning the first line of construction scheduled for October 2016.

The support from the Ministry of transport of the Russian Federation is a significant achievement in the sphere of developing production and market relations of the SkyWay Group of Companies, as well as building a sustainable demand for the created transport technology. Work in this direction is underway in parallel with the construction of EcoTechnoPark, the center of international expert examination and certification in Maryina Gorka. They are an important component of commercial success of the final product, alongside with such its construction and operating features, as low material consumption, comfort and travel speed, an exceptional safety level and minimization of damage to the environment.